Last Thursday, I sent out 68 letters to 19 countries, containing the stickers for the pytest and qutebrowser crowdfundings!

I already had the pytest stickers for a while, and recently recieved the qutebrowser ones as well:

As I had the data in a (somewhat messy) CSV from Indiegogo with notes added by hand, I wrote a small script to get the data from the CSV and generate LaTeX via jinja2, which then gave me a nice PDF which I could use with window envelopes:

Turns out addressing international mail correctly gets really hard when you have the address as individual parts rather than a free text field! I special-cased the UK and US to (hopefully) match their format, and hoped everyone else used something like "1234 City"... See the script source for details if you're curious.

A bit later, everything was folded, and sorted by pytest/qutebrowser as well as Switzerland/Europe/worldwide: 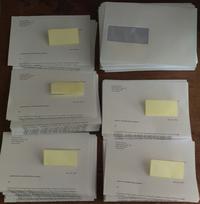 To make things worse, on most of the letters I had to stick two stamps. At least they were self-adhesive!

Some 20 minutes of sticking on stamps later, things were ready - I also sticked another qutebrowser sticker on the envelope, as I have more than enough (and it made it easier to see what's a pytest and what's a qutebrowser mailing):

And a bit later, they made their way into the post box: 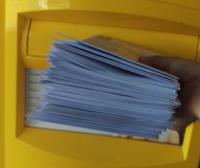 Someone from the UK already told me theirs arrived, so hopefully yours will as well! Please let me know when it does. ;)

If your pledge level also includes a t-shirt, I'll send your stickers together with the t-shirt, which unfortunately still will take a while to arrive. Stay tuned!