On Friday and today (Monday) a dealt with a lot of little annoying issues, but I finally got the qtwebengine branch with the initial refactoring merged!

After incoperating some great code review feedback I got on Thursday and doing some other cleanups, I thought I was really close to merging the branch.

Then I noticed some places inside qutebrowser still access the QWebView via qutebrowser's object registry, and moved things around so the tab object (i.e. the new abstraction API) is registered instead. So far, so good.

However, this suddenly made all tests using a fake tab object segfault on PyQt versions older than 5.6 (i.e. all test environments except Archlinux).

It seems like it's somehow connected to the object registry using the QObject::destroyed signal to know when to remove an object from itself, but when trying to do so, PyQt segfaults.

After trying to find out what's going on without any success, I just skipped those tests on older PyQt versions for now so I could move on. This is clearly not a good solution and I'll need to revisit this in the following days and find the underlying cause...

But there's better news: Today I finally could merge the branch, and with the newest master you can now launch qutebrowser with --backend webengine to try it out!

Be careful however - other than basic browsing, some scrolling and zooming not much is working yet: 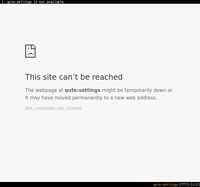 After that worked, I mainly spent time getting QtWebKit specific code out of qutebrowser's QWebView subclass - either removing it entirely because it's a feature nobody uses hopefully, or moving it to the new tab API so it works with QtWebEngine as well. This made things like page load status and progress work.

I used QtWebEngine with qutebrowser for a bit, and started cursing mainly because finding text, scrolling with gg and auto-insert-mode didn't work. So probably those are the next things I'll get to run!

Another blogpost is planned for later or tomorrow morning, showing some photos of how I sent all stickers out - stay tuned!